Though Jirí Kylián stepped down as artistic director of Nederlands Dans Theater last year, the company’s first New York performance since the change in artistic guard—to Anders Hellström—still bears the fine, astute and graceful imprint of Kylián’s stewardship. In fact, the two programs at the Brooklyn Academy of Music in mid-March were comprised of all Kylián works, with one exception—a new work by choreographer and artistic director of Sweden’s Culberg Ballet, Johan Inger.

Kylián, who was thrust into the artistic directorship at the exceptionally young age of 28, took a fledgling company and, over his 25 year career, cut, cultivated, and polished three jewels of the dance world—NDT I, NDT II, and NDT III, which consist of, respectively, professional dancers, young dancers 21 and under, and dancers over 40. As such, NDT is the only company that feels it’s worthwhile to present and, in a sense, honor all stages of a dancer’s life. And while only NDT I performed at BAM, the same sentiment and concern for time, growth and motion was apparent in both programs of the March run.

Since NDT’s last performance in New York at Lincoln Center in 1999 caused a bit of a political firestorm due to Kylián’s Arcimboldo, a piece that displayed his pacifist critique of the NATO bombings of Yugoslavia, I wondered how, if at all, Kylián might address the Bush Administration’s war on Iraq. But no go. (A choice that perhaps most marks the change in artistic directorship from Kylián to Hellström). And while the performances did not offer any outright antiwar statement from the Czech choreographer, they did come fueled with their own kind of shock and awe.

Both programs focused on Kylián’s more recent works, illustrating how this choreographer has managed not to only push the boundaries of classical ballet, bending its straight lines and precise positions to modern dance’s will, but also to sustain such experimentation in an age when ballet’s relevance to modern society is so often called into question. If people are looking for an answer to this, they will find it in Kylián’s Claude Pascal, 27’ 52’’ and even more in Click-Pause-Silence, all works created in the last two or three years.

Claude Pascal is an otherworldly work about memory, time and space that juxtaposes two parallel universes. Four dancers in stiff Edwardian dress are framed by rectangular mirrored panels, which make them appear like Sargent paintings. In haughty, upper class tones, each muses about time, life and memory, all the while gesturing with their respective props—fan, candlestick, cricket club and ball. (It’s like a choreographed game of Clue.) The dancers then pass through the moveable panels, as if disappearing into another time and thus make way for interludes of pure dance or, as I saw them, the “beings” from the future who emerge from the mirrored panels like panthers in the night. In black cropped tights and strapless bodices for the women, bare chests for the men, they are sleek and lithesome, sliding and creeping along the stage in increasingly intricate partnering sequences. It’s as if Kylián is offering us a glimpse of some alien and distant future where we’ve evolved—or devolved—into bodily communication: hesitancy presented in the flutter of a pointed foot, love revealed through the pliable and restrained curve of a woman’s legs around a man, anger in arms that jut out like antennae. Set to Dirk Haubrich’s resounding score, Claude Pascal seems to present the sixth sense distilled in movement. 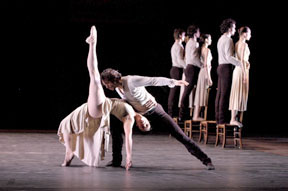 From “Symphony of Psalms.” Photo courtesy of Nederlands Dans Theater.

Kylián’s propensity for the past is perhaps best displayed in Last Touch, a haunting, gothic tableaux vivant in Victorian period dress which features dancers in the claustrophobic parlor of the private sphere, complete with tufted furniture and petticoats. Throughout the entire piece, four couples perform in slow motion as if moving through a viscous liquid—an exercise in sheer strength. The dancers, they move so slowly that if you were to close your eyes for a moment and open them again, you’d be hard pressed to find what, at all, had changed. An arm straightened instead of bent? A pair of legs crossed instead of uncrossed? A bit of ankle revealed underneath a woman’s skirt? Lest this seem monotonously boring, the piece is captivating, especially as we witness love affairs bloom and die before our eyes, and as deceit and treachery is embodied in the frisson of a woman’s turned back.

In Last Touch, Kylián lures his unsuspecting audience into a kind of somnambulist trance—a lovely state that is enforced by the dreamy white sheets that are spread thick across the stage in tufts like meringue or white frosting. When a clap of thunder and lightening disrupts this dance reverie, with dancers suddenly breaking into fast jerky movement—a page is ripped from a diary and burned—the audience gasps and some laugh from the shock. This one moment, though short, seemed overly dramatic and gimmicky for such an otherwise effective piece.

But it is in 27’ 52” and Click-Pause-Silence—presented on two different programs—that Kylián is more minimal and wholly modern. In the former, dance and text converge. Here Kylián juxtaposes the dancers’ movements against excerpts from the Dalai Lama and Baudelaire. The latter, Click-Pause-Silence, features a rotating TV screen and mirror. The work explores the impact of the people who enter and leave our lives. At one point a woman is placed on half point and supported by two men. Her other leg curves in front of her into a low attitude. The men leave her. Her arms remain held out to the side as if the men were still there. Unsupported, she hangs onto the air; the trace of her absent partners still tangible. But this work also seems to be about the performance/rehearsal process itself. As dancers perform, we see images of them reflected in the revolving mirror. Likewise, we see them in what looks like the rehearsal studio on the TV screen. As such, the dance can be found in three different places here: we see the work in progress on TV, the final work on stage, and the work reflected in the mirror. “Which one is the real dance?” Kylián seems to posit.

Kylián’s 1978 classic Symphony of Psalms was on program B. And—full disclosure here—I am perhaps far too attached to this work for any objective critique, my opinions of it colored by the fortunate experience of having danced the first movement as a student at the North Carolina School of the Arts. There I learned to love the arched forward torso and curve of the arms, the weightedness of the walks, the somberness and defiance in the flexed feet that make this work such a stately, moving piece. Kylián’s choreography introduced me both physically and intellectually to the fact that ballet did not have to be about pointe shoes, passés, tutus or bourrées. And though nearly 30 years old, the piece, set to Stravinsky’s score, remains fresh and new, reminding one of Kylián’s signature aesthetic.

John Inger’s Walking Mad, a comedic piece set to Ravel’s Bolero, was also on the second program. Inger, an NDT alumnus, and now artistic director of the Culberg Ballet, has created a humorous work that features dancers cavorting in front of a tall picket fence. They clamor about, stomping and shaking and while this piece is supposed to be a light-hearted love affair, when a man climbs the picket fence and jumps off it turns into a dark existentialist view of a person losing his will to live.

NDT dancers, all trained in classical ballet, have a postured, attuned presence; they are like finely sculpted ornaments. Yet, for all the strength of their appendages, they are supple, serene, composed and calm with a sureness and dexterity and understated virtuosity that lets the choreography glimmer through all the steely grace that is NDT I.

Writer Alicia Ramírez digs deep into the complexity of the absence of in-person theater and its effects on mental health with avid theater goer and arts educator, Jesús Dávila, and Dr. Alisa Hurwitz, a psychologist knowledgeable in theater and the arts, in a roundtable discussion.

Francis Almendárez is an artist, filmmaker, and educator from Los Angeles, CA currently based in Houston, TX.

Hulda Guzmán: my flora, my fauna

Guzmán’s solo exhibition at Alexander Berggruen is her first in the United States since then, and it finds her turning, mostly, to views around her studio, where she was confined during COVID quarantine. It’s a breathtaking retreat. From the artist’s window, palm trees spread out over lush tropical hills.