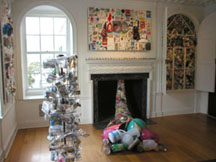 It is easy to forget that all of the waste we generate, the accumulated debris of modern life, will one day bury us beneath its formidable mass. That and the ton of micrometeorite dust which falls to the earth each day. Because we are so often able to push the residue of consumption into the peripheral, backdoor locales of visual culture, the proliferation of stuff continues in the “freed up” spaces of lived and virtual experience. The seventeen artists represented in Reduce/Reuse/ Reexamine manage through strategies both literal and poetic to pull the stark elements of debris and memory back into plain view. The companion exhibit to the Rotunda Gallery’s show of the same name, Wave Hill’s version enjoys the added dimension of existing in a highly “natural” setting devoid of errant trash, where the encroachment of the city’s debris is buffered by protective measures and the ideology of preservation.

Upon entering the Glyndor House, one encounters “Unearthing the American Dream,” Ron Baron’s four site-specific pieces created for the foyer’s niches. Contemporary vernacular objects and their fragments emerge and disappear within the coagulated dirt and rubble of what looks like a cross-sectional view of a suburban backyard. Cheap plastic sports trophies, Eagle Scout paraphernalia, a crushed football and a commemorative plaque assert their presence as hypothetical artifacts, our modern equivalent of the excavated toys and combs of ancient civilizations. Baron underscores the playful fakeness of the encrusted tableaus—so similar to the Disney inspired cross sections in the Museum of Natural History—with a humorous shift in scale. The inclusion of tiny plastic figures that look like German mountain climbers descending into the underground arteries of the recent past gives the piece the whimsical but slightly uncanny feel of a child’s imagination, while implying that what is real and intelligible to one age becomes a hybrid set of ambiguous surfaces to another.

Around the corner, in the south spiral stairwell is Tamiko Kawata’s impressive construction of 1,300 toilet paper rolls entitled “Toward the Light/Archway.” Though she shares certain formal and material affinities with the likes of Tom Friedman and Tara Donovan, Kawata’s ingenuity goes beyond her playfulness with accretion and sensitivity to context, implying a poetic concern for the contingency of usefulness. In her estimation, the number of toilet paper rolls used for the arch equals a twenty-year supply for a single individual, one of many startlingly odd equations that balances a living body with its average expenditures.

The color photographs that document Bob Braine’s “Harlem River Duck Boat” project, showing him navigating through the disgusting refuse along this city’s shorelines, have the immediate effect of eliciting revulsion at our own persistent waste and the idea of it qualifying what is now “natural.” The video component is less interesting, suffering from a didactic tone and poor quality that doesn’t serve the content. On the other hand, Braine’s short video piece entitled “Repatriation,” overdubbed with his pensive narration, is a moving reflection on an almost quixotic responsibility for objects within the context of our temporal circumstance. Shifts in perspective from the black, almost silhouette image of Braine carrying a taxidermied great blue heron to passages of his own embodied steps along the post-industrial edge of the East River, establish the phenomenological balance of an act both powerful and absurd. 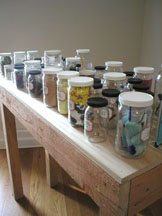 In the same room are three high plywood tables supporting hundreds of small glass jars that contain objects of personal significance to artist Peggy Diggs. “Recollection” is the only piece in the show that invites viewers to satisfy the desire to touch with the accompanying sign, “Please Organize.” In so doing, we begin to piece together a new fictional logic of relationships based on fragments labeled with phrases like, “Childhood shoe of my Dad,” “Rocks from the ground in Mexico,” and “She wore this to make herself well.” The objects become metaphorical and somehow heavy as they take on the shape of a person, and the piece becomes an extreme existential experiment in one’s self-awareness of time in and through the physicality of the mundane. A broken spine of a photo album is made precious again because the narrative it points to lies tediously on the edge of recovery and loss.

The collection of bottle caps painted like pairs of eyes called “I’m Looking At You” by Eung Ho Park couples the meticulous variation of color with the formal parameters of a grid, not unlike Chuck Close, but Park’s sensitivity to the suggestive content of vernacular forms succeeds best perhaps when manipulation is more slight. “Sperm Spoons,” also by Park, is a phenomenal site-specific piece in the north stairwell, comprised of hundreds of bent spoons arranged on the wall like a school of fish swimming upstream.

The viewer’s presence in the north gallery triggers Janet Zweig’s “Professor Obsessive and His Two Compulsions,” a repetitive sequential drawing on a flip sign mechanism similar to those used at train stations to post continually updated schedules. The figures’ postures imply preoccupation, their actions infinitely circular, like an equation or curse that never works itself out. The time-based function of the piece and its mechanical clatter are part of its poetry and humanity—which replays itself again in the viewer’s mind long after.

Both Steve Bradley and Paul Rutovsky have made work out of the literal collection of debris at the local level. Rutovsky’s “Garbage Journals” are fascinating catalogues of his daily ritual of collection on bike rides through Brooklyn, in which his salvaging of matter discarded by others consumes the resources of his own individual life. Bradley approaches collection as a kind of archeology of the present, and after cleaning and cataloguing his finds, has bagged and priced found items for sale in the gallery. Perhaps most directly of all the artists in the show, Bradley reminds us that value is always about context and sight, and the ubiquitous artifacts of material culture will certainly say more about who and what we are than the remains of the bodies that consumed them.

DENISE MCMORROW is a painter, photographer, and sculptor.

Susan Bernofsky’s Clairvoyant of the Small: The Life of Robert Walser

Clairvoyant of the Small: The Life of Robert Walser (Yale University Press, 2021) is an affectionate, precise piece of writing that illustrates a man of complexities both personal and professional. It is an intimate portrait of an artist, soul-crushing in its realism, with all its valor and rigor.