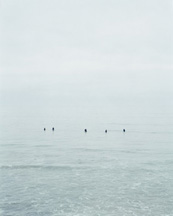 Catherine Opie shows Surfers at Gorney Bravin & Lee. The most remarkable thing about this exhibition is its installation. Wrapped around a corner of the gallery’s North and West walls, long shots of the sea become a landscape of Los Angeles. The hazy, horizonless grays of each individual print sum up to an easy ocean and, as a group, the prints convey something of the bland immensity of watching water from far away.

Individually, however, these studies are not aggressively transformative, nor simply documentary. Out of fourteen prints of exactly the same size and shape (51 1/4×41 1/9 inches framed), all untitled, none approaches the sea differently from any other. Hiroshi Sugimoto kept his frame constant in the Seascapes of 1990-2002, but his pictures are nevertheless emotionally and aesthetically distinct. If it is Opie’s intention to convey sameness, the series should be kept whole, as a unique group—a sculpture—so as to emphasize monotony.

It is not Opie’s intention to keep the series together, however. In editions of five, plus two artist’s prints each, that’s ninety-eight salable iterations of this vantage point. A few are shown concurrently at the Whitney Biennial. Because these landscapes are understood and sold as individual photographs, the potential energy of the installation breaks down. The individual prints lack the authority of the group. On their own, they are attractive and vaguely sentimental: distant, lonely visions of how to see the sea.

Perhaps to compensate for that distance, Opie lines the South and East walls of the gallery with medium close-ups of the Surfers themselves. She goes so far as to put us on a first name basis with these people: each of the twelve prints is named after the surfer in the picture. There’s Nick and Margaret and little Adam, seven boys to five girls. These pictures do not evoke any of the vulnerability of Rineke Dijkstra’s beach portraits, nor do they add much to a spread in Surfer magazine besides a little technical clarity. They are a conventional attempt to personalize the experience in the gallery, and detract from the mystery of the other walls.

This project is described by Opie’s gallery as a document of a community defined by a landscape. The installation of the sea pictures is a response to that subject. By creating a new spatial experience out of her prints, Opie interprets the concept of landscape. Otherwise, however, the level of investigation in this room is questionable, and the visible evolution of Opie’s response to Malibu is null. 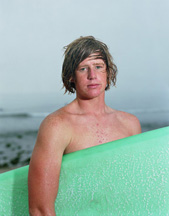 Perhaps the problem is the larger one of the relationship of photography to nomenclature. Opie’s projects, like those of many photographers’, are so easily projects of classification: start with the word "surfers" and completely illustrate the concept. Cover all bases. What happened to starting with a picture and seeing where it takes you? For all their lack of variety, the twenty-six pictures in the gallery could have been made on the same day by some assistant with a list. That’s one thing if you’re Sol LeWitt, making a point about the relationship between concept and execution. It’s another if your work has pretensions to the representation of either a community or a landscape, let alone some sentimental conjunction of the two.

Catherine Chalmers’s compelling multimedia exhibition We Rule has been culled from a ten-year commitment to interacting with over a dozen leafcutter ant colonies located in the Osa peninsula of Costa Rica. It includes high-resolution videos, drawings related to Costa Rican rainforest flora, and an intricate wall installation depicting a to-scale leafcutter colony wending its purposeful way through the basement floor galleries of the Drawing Center.