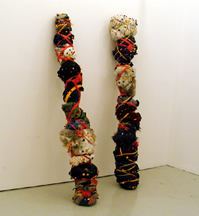 Mahalchick’s work fills Canada Gallery in a panoply of forms: wall pieces, free standing sculptures, leaning sculptures, and hung tapestries. At first glance, all the works seam to be made from scrap fabric; in fact, close inspection reveals seams, buttons, zippers, and a litany of found, functional things amidst a material sea. The gallery owner, gazing at a totem pole of fur remnants, a leather jacket, and pairs of pants, remarks that she keeps asking Michael when she’ll get her trousers back. Apparently, this thrifty conservationist is not only an avid scrap-bin scout, but also the kind of man who might steal the shirt off your back if the texture-color-pattern-touch were just the thing he needed.

The work is exuberant and free, though the pieces themselves are literally contained: in each, fabric is tightly bound to form an exterior surface that is essentially smooth. Sometimes, the material is forced into balls that are held tightly in place with thread, yarn, and torn cloth, and bejeweled with buttons that are sewn in garlands and tacked into place. Such is the case with the stolen pants works. The pair is made of stacks of balled-up clothing that are remarkably solid, suggesting perhaps an internal support (imagine heads on spears, or a shish-ka-bob). The character of the fabric changes in this context and it assumes a weight that it doesn’t possess when it hangs on a rack or sits in a drawer.

The bodily reference brought by the choice of material is reasserted in the totem poles’ human scale. The absent body, evoked formally, reasserts itself in other sculptures. In the main gallery, two corners are occupied by piles of stacked cloth that seem to be literally supported by the two walls they lean into. The decrepit shapes call to mind the exhausted, homeless men who populate New York doorways in the evening, and they are poignant and bereft.

In the middle of the room, a tripod made of wood peeks out beneath a cloak of fur, decorated with small plastic flowers. The reference to Joseph Beuys hunched over the wolf in his seminal I Love America performance, may simply be pseudo-morphology, an improper comparison drawn from a superficial reading of exterior form. Nevertheless, Mahalchick’s treatment of materials suggests many American artists of the 1960s and even late 1950s, among them Robert Rauschenberg, Bruce Conner, and Claes Oldenburg. Perhaps the most obvious link to this time should be made with the evening performances, akin to the Happenings staged by Allan Kaprow, and others, often in the East Village. Events as disparate as a writhing naked woman’s dance performance, and small-dog wrestling took place nightly at Canada over the course of the month. As I imagine happenings often were, the events were orchestrated spontaneity, filled with awkwardness and exuberance for the time, the place, and the basic fact of DOING.

Although there was a clear reference and respect for history, the work recognized precedents, but moved forward in its own direction. The wall pieces were generally more decorative than the freestanding sculptures, and felt like explorations in color and formal composition. They could perhaps be viewed as studies for the more radical three-dimensional pieces, but might just be a different vein of tactile exploration. One is a tapestry made primarily of deep blue denim-like fabric. In the middle, blocks of different colored cloth are stitched together, and the effect is like standing next to a confident, pleasant abstract painting, in which gesture and touch are replaced with texture and weight. Another wall work is made from pieces of fabric that are wrapped around solid forms whose original identity is wholly obscured by the shiny smooth bands to create a pure geometric abstract form. The weaving in these pieces is seamless, without beginning or end, and its gloss and sheen invites the touch. Haptic desire is palpable throughout the show, and alludes to the human nature of the work. It also reflects a powerful transfer of meaning, for as Mahalchick reinvests time into the trash and junk that surrounds New York, he creates objects that speak beyond the meanings and associations of their own substantive parts.

The term chosen to describe Mahalchick’s material choice on the press release is worthy of note: sub-domestic handicraft. Traditionally female, low-art materials have been stylish for a number of years now, and it is not unusual to see stuffed animals, pipe-cleaners, or beadwork in the gallery. Culled from craft store supplies, these projects often take the chosen material to grotesque and far-fetched proportions. For instance, currently in Chelsea, a monstrous, multi-color pipe cleaner peacock inhabits RARE Gallery. Absurd in its proportions, the bird claims no purpose other than the flaunting of its own quite beautiful tail. And while tremendously charming, the object merits nothing more meaningful than a simple statement of repetitious labor on the part of its maker.

I diverge to illustrate how Mahalchick’s work differs. His craft, as it were, does not aim to elevate or transform the domestic world. Nor does it signal a dramatized ennui that is suggested by the traditional boredom associated with crafty-tasks. His work is sub-domestic because it is based on the scraps, the tossed-away, and the worn-out, but grand because it gives dignity and grace to forgotten, ignored forms.

Todd von Ammon and the gallery have together curated a menagerie of form: these objects may illustrate the history of sculpture, they certainly depict its various categories and typologies, and all are very small. They veer from the figurative to the abstract, the absurd and surreal to the conceptual and symbolic.