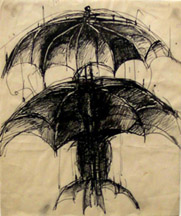 With the exception of Henry Moore, I’ve always thought that sculptors made the best drawings. Sculptors, perhaps because of their acute spatial, tactile, and material sensibilities, always seem to insert an extra dimension into their works on paper—one often left unexplored by artists thinking solely in terms of painting. This can apply to contemporary artists too, and the work of June Leaf provides a ringing, yet challenging example. Although not exclusively a sculptor, Leaf is definitely some kind of tinkerer, and the lines of her drawings read like wrought wire. "I’m a painter," says Leaf, "but sculpture is my anatomy lesson." I’ll accept the artist at her word, but insist that Leaf’s approach to the figure, regardless of whether she’s working with paint or ink, is still principally a sculptural one.

Over fifty works, mostly drawings, covering fifty years of Leaf’s artistic output are included in this generous exhibition. This show is of the same high standard one usually associates with The Drawing Center and its surveys of important, but marginalized visionaries, such as Victor Hugo, James Castle, Henri Michaux, or the Plains Indians. This grouping, however, unlike those, doesn’t really feel like a typical smallish retrospective. It’s really something much more interesting than that, partly because of Leaf’s own idiosyncratic approach to the figure, which resists easy categorical placement. The selection of work presented here is broad and defiant, but it is also spotty at times. Although the show is organized chronologically, it is difficult to read the groupings in terms of coherent phases: the consistency of Leaf’s impulsive character is forcefully revealed instead of the usual progression of styles and predictably tiresome era-related changes. There is something unusually insistent about this show. One senses a considerable restlessness is at hand, operating just under the surface in everything on view.

Perhaps because Leaf is now seventy-five and old enough to have been labeled a "proto-feminist," her work drives the discourse rather than the reverse. There is nothing strategic at work here from the outset—no clever calculating whatsoever—and that lends the work a refreshingly disarming power that recalls another time when most art was created as an immediate extension of everyday observance, as opposed to a specialized professional practice.

A strange combination of horror and whimsy pervades Leaf’s various welding of the human with the mechanical in a manner reminiscent of Paul Klee’s famous "Twittering Machine." A generational infatuation with existentialism and the absurd sometimes weighs in heavily on the humor, however, and in weaker moments it lends the drawings the forced and frozen angst of a Ralph Steadman illustration.

Each work in this show operates somewhat autonomously, relying on unique and surprising inventions as transforming factors with regard to the figure. Various objects, such as umbrellas or watering cans, are frequently fused to the body, and a rude brand of puppeteering runs rampant throughout. All of the work is peculiar and personal, and Leaf’s imagery proves both creeping and relentless.

Leaf began as artist in Chicago, at about the same time as Nancy Spero and Leon Golub, with whom she shares a taste for graphic viscera and violence. She now alternately resides in both New York and Nova Scotia, but the work included here speaks less of Bleecker Street and much more of Mabou Mines—silhouettes of fishermen are a recurring motif. I must admit that everything I know of Nova Scotia, where I assume a certain type of artist might enjoy a special edge-of-the-world-type isolation, has come to me through the photographs and films of Robert Frank, Leaf’s husband. Living as an outsider seems to have liberated Leaf from too much restrictive sophistication because her drawings feel like natural investigations, irrespective of plain good taste.

The iconoclasm of Leaf’s works on paper reminds me somewhat of the figurative drawings that Joseph Beuys did during a decade long period of seclusion following World War II. Leaf, of course, doesn’t have the same shamanistic pretensions as Beuys, but she does seem to unleash a similar primordial energy at times. I think that Leaf’s own exile has probably provided her work with it distinctly original look too.

The figure remains an endlessly renewable form in art. It is an inexhaustible vehicle that can carry the work of weaker artists, but it is also still capable of releasing unforeseen form in eyes and hands as fervent as Leaf’s, with her stunning gift for wedding the imaginary with the local. In this year’s remake of the satirical horror classic Dawn of the Dead, the new wrinkle on the zombies is that they can now run like regular people and charge the living at full speed—they’re the living dead "with legs" in sports chat banter. Leaf’s acerbic works on paper, where bodies speak of life and death conditions simultaneously, are reanimated with a similarly biting vengeance.