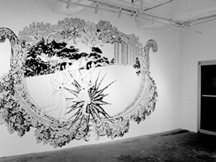 Conflict without resolution is not merely a description of the contemporary work of artists Francisco Lopez and Abigail Lazkoz, but a condition of being. Both artists succinctly convey ongoing conflicts that appear fully formed without beginning or end. Their works are formally spare, giving them a sharp conceptual edge and allowing them to cut into the simplistic moralizing of reactionary culture.

Abigail Lazkoz presents a narrative series of black-and-white wall drawings in War Stories I have Heard depicting characters in banal settings amidst an unidentifiable conflict. Men dressed in women’s clothes running with machetes in "story number two: a machete en las casas" (2004) imply that the conflict is rooted in masculine identity, while "story number five: heir" (2004) depicts a mother holding her child in an interior domestic space. The action is rendered in a simple, graphic manner, reminiscent of illustrated manuals and framed in ornate patterns. The threat of violence is a constant in all the drawings, although the characters and their actions are often presented in ridiculous combinations. In one of the small drawings "introduction: old storyteller" (2004), a man with a comically absurd, old man’s head sits around a fire with a disinterested woman creating a narrative of civil and social dislocation. Lazkoz’s style is competent, and more broadly her work seems to represent a deep distrust of both social and military conflict as they were closely aligned in the Spanish Civil War. Together the drawings and mural manage to be a comedy of human failure that has a historical sweep and intimate personality.

Lopez works with even less than Lazkoz in his video "Telepathic Numbness" (2004), a slow motion montage that makes the familiar manipulation of video frames interesting again. Traversing territory made popular by Paul Pfieffer, Lopez manipulates footage of a seventies television show to create a hypnotic exploration of possession and transformation. The video, which seems slightly stretched out for self-importance, is deceptively simple: Dynagirl is being possessed by a maniacal genie character. The event is told with only four individual shots, Dynagirl, a yellow instrument, Electrawoman, and the evil genie. The beauty of the video is Lopez’s careful editing of the individual scenes and his manipulation of the frames to create a strange rhythm echoed in the eerie soundtrack. The montage of Dynagirl’s possession pulsates between the first three shots until a beautiful long take in which a red cloud slowly morphs into her blank visage. Suddenly, she erupts into a teeth clenching smile. Her slow motion laugh is disturbing, and goes on until the video cuts to the evil genie laughing like Dynagirl or perhaps for her. The titular reference to telepathy seems appropriate, as the video cuts back to Dynagirl who fades to black. Nothing is resolved, and the video loops immediately without interruption. The montage and the audio are compulsively watchable, though its length doesn’t seem justified conceptually.

Together, Lazkoz and Lopez make a statement on the ambiguities of violence, making the protagonists and the antagonists indistinguishable. In doing so, the artists challenge moral perspectives that reduce questions of gender, class, race, and culture into an "us or them" mentality. The stance of these international artists seems almost radical in relation to the increasingly conservative and cautious New York art world hiding behind more escapist fare.

The Condition of Being Addressable

On view at the ICA LA, an intergenerational group show of contemporary artists takes on the broad topic of identity politics as a lived experience, or, as the exhibition is titled, The Condition of Being Addressable.

“All of us have to deal with some sort of human condition,” Bella Donna said. “And what better way to find your way through these internal things in life than through music.”