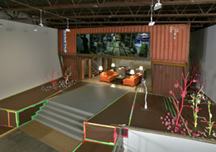 Imagine that you live in a house with an origami garden, custom designed carpeting, fireplace, stainless steal kitchen, three bedrooms, two baths, and mahogany sliding doors. And how about a Nissan G35 parked right out front? Well, if you want it, you can have it; it’s made to order.

In the 1976 Venice Biennale, Dan Graham exhibited "Public Space/Two Audiences," in which the work was the architectural container, as well as a display container for the viewers inside—observing themselves, the container’s structure, and what effects the materials had on their perceptions. I’m recalling Graham’s work in the Biennale because of a similar experience I encountered at Deitch Projects. The show at Deitch brings with it a resurgence of architecture, art, and public awareness. As the materials used in Graham’s exhibit were used to control a person or a group’s social reality, so Suburban House Kit displays a structure for the commodified consumer mind. Architect and artist Adam Kalkin, along with Jim Iserman, Martin Kersels, Aernout Mik, Tobias Rehberger, and Haim Steinbach, created model homes for the suburban landscape and turned Deitch Projects into a showroom.

Walking into the space, I crossed the border between NYC and a uniquely American adaptation of suburban living. I stood staring at a model home made out of freight cars and custom designed carpeting, with a shiny red sedan parked out front. Through the colorfully constructed origami garden by Tobias Rehberger, the viewer is led into a full-scale model home, with all the amenities. Walking through the rooms of the house, I found the bedrooms to be the most darkly alluring, with the master bedroom feeling more like a vacant cell. Closets displaying a fifties inspired wardrobe, Isermann’s post-war-esque carpets, and a library filled with copies of a book entitled Addiction, ironically glance at the birth of suburban culture in America, and the obsessions of consumerism that follow. Depicting such obsessions is Aernout Mik’s video, "Pulverous," projected from the second floor window of the house. The video shows a group of random individuals engaging in obsessive-compulsive acts in a supermarket-like setting. Mik brings to the viewer’s attention the schizophrenic and compulsive underbelly of the consumer driven suburban culture, which viewers can perceive through their own visual and visceral experiences. The video along with Steinbach’s pantry of collectable model fixtures and Kersels’s ball structure floating in the backyard make up Kalkin’s "Quick House," a series of transformative experiences that embrace the culturally driven obsession with the American utopian vision.

If experiencing all this isn’t enough to send chills down your suburban spine, you can become the ultimate consumer and buy a home of your very own in one of four models—and get a thousand copies of Addiction to go along with it! The ultimate consumer product for the American suburban landscape, as produced by a set of international artists and architects, has never looked so appealing.

From the grounds of Kennington Park, Jebo could see the top eight floors of Shellington House cast against the late afternoon sun. It would take careful looking to pick out his room on the twelfth floor. He stared hard but with no luck. Except for the pair of balconies on either side of each floor, there were no clear demarcations between the flats. To stare was a task. Squinting didn’t help. He recalled Richard Serra’s phrase with unusual clarity: The act of seeing, and the concentration of seeing, takes effort.

Bob Thompson: This House Is Mine

Thompson (1937–66) had a knack for keeping us on the edge of our seats. Throughout the exhibition Bob Thompson: This House Is Mine it becomes clear that he moved fast, that in the moment, most could not keep up. After leaving Louisville University in 1958, he was relentless, finishing over 1,000 paintings before passing on at the age of 28.

erica lewis was born in Cincinnati, Ohio. Her books include the precipice of jupiter (2009, with artist Mark Stephen Finein), camera obscura (2010, with artist Mark Stephen Finein), murmur in the inventory (2013); and the first two books of the box set trilogy: daryl hall is my boyfriend (2015) and mary wants to be a superwoman (2017). Her chapbooks have been published by Belladonna, Lame House Press, and After Hours/The Song Cave.