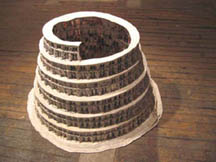 The challenge to orchestrating group shows is in coherence. Given a theme, how do you integrate the differing approaches of various artists to it in order to produce an exhibition with a message? The problem is compounded when you are dealing with talented artists whose creations, products of deeply independent visions, necessitate careful handling. So it is for the artists in home, a group show at the DAC curated by Bruce Brown of Rockport, Maine. Brown does his job; a walk through the rough terrain of home sets one pondering one’s own understanding of the show’s title.

David McQueen appears skeptical of faith in home as a beloved place of origin. His contribution is an arachnoid machine that chips away with long metal legs at a wafer of plaster on its underbelly. Suspended from the wall, it drops small flakes of plaster on a tiny village at knee level, a winter flurry. The mechanisms that produce the image of home, suggests McQueen’s metal spider, dwarf our love of a place in both significance and magnitude.

Sean Ryan’s DVD of a river canoeist in a glass bottle and his sculptures of office furniture made of office paper are clever yet their contribution to the show’s theme remains obscure. George Ferrandi’s and Danica Phelps’s respective installations of drawing and painting offer greater thematic support to the show. They each contribute whimsically, Phelps with a concept of home as absorption in quotidian activities and Ferrandi with one of home as redemption wrung from existential cartoon angst.

Ferrandi’s dreamy installation rests uncomfortably close to the grisly photographs of Melonie Bennett, with only Katherine Bradford’s "Shaver Man" in the middle to attempt reconciliation. Bennett’s photography stands out for its unflinching handling of the dark side of rural life. It’s hard not to assume that the artist draws on personal experience to create the dark mood in her photographs of dereliction, substance abuse, surgical scars, and psychological unease. Set in what appear to be campgrounds and trailer parks, her images are effective because they seem real. These are not actors she photographs, but figures forming the fabric of their own hopeless home.

Diana Cherbuliez’s work is among the most probing in the show. She reveals her thoughts on home in a DVD entitled "Wish" and a sculpture evocatively titled "Why Buildings Fall Down." The latter is a tower of crossword puzzles and pages from a book that shares the sculpture’s title. The tower appears unfinished with fine, red thread extending upward in the direction construction will take place. The whole is strongly reminiscent of Pieter Bruegel’s painting of the Tower of Babel. Like the painting, the sculpture impresses with the intricate complexity of its structure. With a linguistic emphasis derived from her choice of materials, Cherbuliez echoes Bruegel’s concerns.

"Wish" is also rooted in preceding narratives. It depicts a pair of ruby slippers on metal armature legs that dance an awkward jig. Their movement continues until flint on the soles strikes the stone floor and the shoes are engulfed in flames that are then extinguished by the motion of the ongoing dance. In The Wizard of Oz, Oz had the power of fire to evoke fear, an illusion dispelled when his own weakness is revealed along with the strength of Dorothy and her ruby slippers. Dorothy’s wish was to return home; in the film she finds a way to make it come true. In Cherbuliez’s DVD, the wish goes unfulfilled, for although the ruby slippers extinguish their fire, the DVD’s loop inevitably brings it back. home remains out of reach. Why do buildings fall down? Who holds the power to quell the fear of fire? The riddle of Cherbuliez’s work is in the questions it poses. The veil of words in which her tower’s real structure is cloaked seems to hide the answers. One feels certain that, despite the weight of words threatening to bring it down, construction on this inhospitable edifice will continue to obscure a clear view of home.