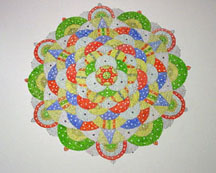 The new installation of the painter Glen Goldberg and the sculptor Richard Van Buren is so harmonious a collaboration that their distinct styles and mediums hardly seem to matter. While Goldberg’s paintings allude to the ephemeral lightness of objecthood, Van Buren’s sculptures turn actual objects into a delicate balance of weight and weightlessness. While one meditates on the cosmic beauty of light and air, the other celebrates the sensual elements of earth and water.

Glen Goldberg is, I think, making his best paintings in years. Unlike his early works, which display impeccable graphic intelligence infused with a minimal deployment of form and controlled tonality, recent paintings like "Wish" embody more substantial extrapolation of form and content. With multitudes of various sized dots evolving outward from a central, concentric spin, they burst into robust petals and surrounding birds in flight. In the smaller canvases, which at times rely on hierarchical figure/ground relationships, there are also abstractions with mandala-like constructs painted in bold clarion colors that float indeterminately in space. In the abstractions I find an inherent order that is ornamentally infinite and permeated by a genuine monastic quietism. They are birth motifs which try to resist troubled symbolism and the wilderness of nature.

Richard Van Buren is a sculptor of extravagant sensuality. He seems to reference geology and marine biology, but these are only a pretext for the substratum of vigor poised between improvisation and kinetic energy. A series of pieces, including "Kowloon" and "Eagle and Clam," stretch across the gallery, projecting out from and suspended on the wall; together they constitute a repertoire of forms that gravitate around objects rather than representing them. For the medium of thermoplastic that becomes malleable in heat and solidified in cold, one detects Van Buren’s extending heads as a conduit for the lava flows of his process. And in spite of their sheer Baroque pleasure, which tends to rise in swift, upward movement, they are fierce, congested and heavy. Yet at the same time their tensile force is autonomous and regenerative.

Goldberg and Van Buren are both artists who are constantly and restlessly searching in ways which are not easily categorizable. Having had already enjoyed considerable recognition a decade or two ago, the current exhibit is a testament of renewed spirit in flux, capable of transcending the sublime into the burning exterior from above and below.

Existential sculpture as practiced by Alberto Giacometti, his via confrontational and often desperate portrait objects that stare back unblinking, or howl open-mouthed—has been little exercised since. It sleeps like a buried high-voltage line, as perilous as a third rail. No artist who isn’t perfectly serious, and tinged with gallows humor, should touch it either.

Gregg Bordowitz’s Some Styles of Masculinity

A complex arrangement of memories, intellect, postulations, jokes, and insights that attempt to capture a performance, on- and off-stage. It is a combination of many similar yet not exact performances; improvisation and chance are ever-present, it is not a record of anything that actually happened, but rather a presentation of what the artist and publishers want you to have.