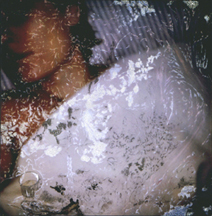 Sebastiaan Bremer’s art concerns surface and association. By drawing over re-photographed snapshots in inks and dyes, he intricately builds plastic surfaces of the kind associated with painting. The images that emerge from Bremer’s skeins of calligraphic line appear to be free associated from the meaning of the original snapshot. The results are by turns astonishingly beautiful and satisfyingly mysterious.

The pick of this show is the ambiguously titled "Monkey Love," which shows a sleeping girl with her white comforter pulled high, leaving only the curves of neck, shoulder and jaw exposed. Bremer draws over it in black and white. From a distance, the white ink looks like brilliant highlights on the comforter. Up close, one is drawn into its web of connected images: a mouth, a forest, a bare breasted woman’s head, a fish, and, if I’m not mistaken, a touching rendition of Philip Guston’s painting of himself and his wife Musa huddled in bed.

In "Monkey Love," Bremer seamlessly weds image with drawing. The two support each other both formally and conceptually. The artist’s drawing does not merely sit on the surface of the photo, but integrates itself in the structure of the composition, as with the white ink and comforter. Reciprocally, the photographic image acts as a receptive screen against which the drawings read as manifestations of the sleeper’s dreams, her thoughts made visible. The fruits of Bremer’s labor are equally evident in "Castle Door," whose unwieldy green blotches read as holes in the photo emulsion. Two pieces in alizarin crimson, the palettes of which are less conducive to Bremer’s dreamy mood, add a touch of intensity to the show.

"The more you look, the more you see," runs the title to Gregory Volk’s catalogue essay on Bremer’s work. It holds true. The artist has invested heavily in his struggle with two mediums and his work pays handsome dividends for the patient viewer. One feels keenly drawn along by the fluid wisps of line in anticipation of the next image to be revealed. Now lost in the artist’s stringy spider’s web of drawing, now contemplating a rendered form, the viewer might always back off to contemplate the hazy landscape of the original snapshot. Bremer’s thorough consideration and nuanced response to the conundrum of integrating drawing and photography opens fields of thought for the potential in such liaisons.

In Dialogue: Inner Life, Out Loud: A Strange Loop

Michael R. Jackson’s new musical A Strange Loop premiers at Playwrights Horizons this June in association with Page 73. Earlier this spring, playwright Branden Jacobs-Jenkins and Jackson sat down together for a long talk, covering their time at NYU/Tisch, Jackson’s coming into his own with musical theater, and “negro-liberalism.”  What follows is a curated glimpse into that conversation.

This month brings the publication of Phil Neel’s Hinterland, the first in the Field Notes series of books published by Reaktion Books in association with the Brooklyn Rail, to provide in-depth analyses of today’s global turmoil as it unfolds.