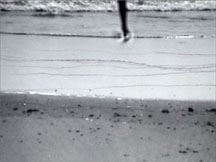 At first glance the use of technology in simple processes sets up technology as a kind of ersatz or second nature in Jill Baroff’s Second Nature.

In "Point o’ Woods, Havana, Venezia, & Fire Island" (2003), the tracing of tide patterns in ink onto gampi paper shows a process where information is translated into a grid form that makes the algorithms immediately visible and also worked by the hand. The minute you know what the pattern represents it takes on a heightened significance. These subtle grid patterns communicate the rhythm inherent in cosmic movements and so they are second nature to us as well. The snapping of the gampi fibers in mounting evokes the fragility of nature’s balance, the earthquakes and meteorites. The mounted gampi then rests on wooden shelves leaning against the wall in a move that sets gravity over architecture and touches the origin of her subject.

From a photograph of "Blue Sky: NYC010101" (2003) shades of blue and gray are printed out on ink jet prints and installed on wooden shelves. The presentation of these fragments of sky on shelves allows us to compare and see, or not, the subtle distinctions when the layers of grays or blues overlap. The shelves are mounted just high enough above eye level to prevent a strict examination of the material; they signal to the body the memory of looking up.

The gray skies of "Bentheim, Germany" (2004) are colored droplets created through the magnification of a photographic image processed by a scanner and an Epson printer. The remarkable thing here is how the droplets read as a sectional or microscopic view as if the photograph had sliced a plane from the sky. The process privileges technology as if it were engaged in a search for truth; in fact it reveals the nature of the process.

Robert Smithson defined art as the embodiment of the idea in the material, a dialectical relationship that allows for art to breathe. Each material has its own resonant space. If the material is weak, limited, or its potential is not articulated, it impairs the ability of the idea to communicate and therefore to exist.

Baroff’s ideas show us the limits of several different materials. At the back of the gallery next to a window, a piece of gampi mounted directly on the wall reflects light from specific angles through its translucent fibers and creates a subtle sense of place that echoes the theme of Baroff’s installation.

In a single channel video "Drawing Rockaway" (2003), we watch the meditative pattern of waves coming in coupled with the obsessive need to mark the innermost point of the tide. This very disconcerting image evokes at once the little sandpipers that run along the edge of the incoming waves and a wheel for marking fabrics, and it repeats over and over like the tide. You don’t know whether it’s happening on the beach or the screen. This conflation of perceptions seems to capture best the kind of change Baroff is after; the gap between the liquid crystal screen and what is represented on it is made concrete.

This complex body of work takes on nature as subject, Baroff’s edge comes in presenting the tradition as foreign. Where the articulation of the material is literate, the mind goes to work on the ideas embodied in it and a world of thought opens up that suggests a number of possible meanings. Where reason remains lodged in the explication of technological processes, Second Nature falls flat.

Camryn Bruno is a 21-year-old spoken word poet, author and Curator at the Bowery Poetry Club. She has performed at the Brooklyn Library, The Apollo, The UN, The Public Theater, The Intrepid, The Apple Store and many more. Her poems explore women’s issues, social justice and community building and strives to help with Black women independence everywhere.

The sophistication and innovation of Lyght’s work depend on a balanced layering of colored planes slipped in and out of their constructed enclosures. The originality of the work depends on autonomous self-reliant balance that mirrors the life he has lived as an adventurer and explorer.