"May you live in interesting times," goes the ancient Chinese curse. Arcadia to Metropolis seems a provocative artistic response to what were interesting times, indeed. Dr. Roland März, curator at the Nationalgalerie Berlin, and Renée Price, Director of the Neue Galerie, have designed an exhibition that has the narrative arch of a three-act play, each of the galleries depicting major trends in the developments of this, the Expressionist heritage.

Entering gallery one, I was initially zapped with a blast of color, particularly vermilion cad red, deep, gaseous zinc yellow, ultra blue, and a spectrum of greens. A flood of nostalgia followed as I recognized many of these paintings from the collection that I’d visited many times during a tour of duty in Germany, while Berlin was still besieged behind the Wall. This is the early foundation of Expressionism as typified by the Brücke group. It is a romantic, erotic, and utopian period. Gauguin, van Gogh, and the Fauves were the inspirations for this union of young painters, and they sought to simplify their forms and color to an even more emphatic, spontaneous primitivism. Karl Schmidt-Rottluff’s "Gutshof in Dangast" (1910) uses quick brushwork with thinned paint, reminiscent of watercolor, contrasting hot red earth, with dappled ultramarine shadows and brick-red walls. This juxtaposition of color is so intense as to visually sizzle. Kirchner, Heckel, Müller, and Pechstein spent their summers in the countryside, near lakes in Bavaria and around Dresden, and the nude bather is a favorite subject. Shapes are round and sensual, skins are tanned and tawny, and skies are filled with sunshine. A lovely painting of a mother and child by Paula Mondersohn-Becker, and a pair of bathers on a South Seas beach by Nölde, briefly a member of the Brücke group, round out act one.

The outbreak of war in 1914 structures the second act of the show. The bucolic life of the country bohemian is shattered forever. Like many young adults, the artists leave the countryside, some for military conscription, others to seek fame and fortune in the cities, particularly Berlin. The transition is dramatic as revealed in the subject and style. Gone is the warm countryside, replaced by the frenetic velocity of the city. A Gothic angularity becomes more pronounced. Brush strokes carve space, like the knife cuts used in their woodblock prints. A self-portrait "Selbsbildnis mit Einglas" (1910) by Schmidt-Rottluff depicts the artist with monocle, a fashionable sign of the dandification of the nature boy. The robust nude bathers are replaced in Kirchner’s "Potsdamer Platz" (1914) by gaunt prostitutes, ironically clad head-to-toe in long dark gowns, their sallow chartreuse faces crowned with extravagant hats and veils. The jagged nocturnal cityscape is illuminated not by golden sunshine, but by arc lamps and their harsh glare. Muted greens and grays seem to embody the angst and foreboding of the war and the economic instability that gripped much of the nation. Old wives tales declare that before earthquakes and other natural disasters, dogs and other animals sense the coming cataclysm and head for the hills. Perhaps the hypersensitivity of some artists is a parallel perception. 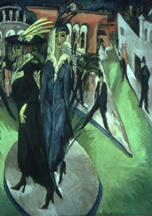 Act Three begins with the defeat of Germany and the November Revolution. Out of the flames is born the Weimar Republic. Disgust with the gore of WWI, the first industrialized combat, leads many of the artists, some of whom experienced it up close and personal, to seek a depiction of it in all its realistic glory. Simultaneously the dadaists were expressing their discontent with the entire culture through their anti-aesthetic. The Neue Sachlichkeit, a generalized term for this return to realism is, as Dr. März explained, not all together satisfactory. He prefers the term "Verist," which carries the implication of political activism or a proletariat morality of content. George Grosz, Max Beckmann, Otto Dix, and Ludwig Meidner all seem to imbue their images with a sense of cynical misanthropic satire. Undoubtedly one of the great antiwar statements is Dix’s painted collage "The Skate Players." Three mutilated veterans sit around a table playing cards. Mostly they are remnants, mere torsos of their former selves. The only leg among the three is used by one player to hold his cards. Heads are cobbled together out of mechanical devices and gears. Metal foil is used to depict a plate in the skull of the central figure. The head wounds on the figure on the left are rendered with such voluptuousness and sensuality that they seem to vaguely echo stitched genitalia. This transformation of scars into a type of Teutonic fetish is a lacerating parody of the German tradition of the "Heroic Glories of War." Actual newspapers, cards, and a paper fabric (no doubt a forerunner of polyester) used to produce cheap clothing are employed by Dix to add the brevity of pathetic realism to the picture. "Schnitt Mit Dem Kuchenmesser" (1919) by Hannah Höch is a collage that that pokes fun and piles scorn on just about every institution and ideal around. This "trashcan chic" captures a feel of authentic grungy energy and political engagement that captivated the imaginations of punk rockers sixty years later.

Though gallery three is the final chapter in this trilogy, it doesn’t wrap things up in a nice tidy bundle; no happy endings here. By 1926 the rumblings of National Socialism were already being felt. A decade later the Entartete Kunst exhibit labeled most of this work "degenerate." Kirchner leaves for Switzerland and suicide. Nolde, an early supporter of the National Socialists, is exiled to a farm on the northern coast and forbidden to make art. Max Beckmann immigrates first to Holland, then to New York, where he teaches at the Brooklyn Museum of Art School. As our own times seem to become more "interesting," perhaps we can learn their lesson that art is an antidote to the tides of war, the antithesis of the suicide bomber, the attack that seeks to make people more alive.

The Life and Times of Alvin Baltrop

He presents an experience that, in the language of the time, would have been called deviant as something that simply exists in the world on its own terms, and demands that the viewer actively reckon with their response to it.

While Moyer’s solo practice is rooted in meticulous attention to composition, and Pepe’s in history and politics, the 10 works on view made jointly and mostly while on residencies reflect the centering of experimentation and play that can happen when removed from daily responsibility and routine.