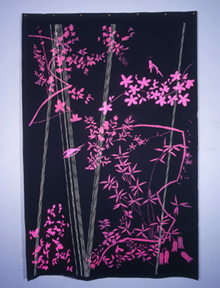 Matthew Brannon’s recent show at John Connelly Presents, Exhausted Blood and Imitation Salt, consisted of two canvas tapestries, (needlepoint and sprayed acrylic, showing imagery of bamboo and birds), two silkscreened posters advertising nonexistent films (House of Rot and Sick Decisions), four letterpress-printed wine labels, and two ink drawings of place settings. The casually inscrutable tone of the works suggested an artistic practice in which content is defined by its resistance to simplification, and communication takes the form of an amiable but nerve-wracking game. An interview with the artist at his studio in Hell’s Kitchen in late March played out along similar lines, touching on the uses of promotion and the desirability of confusion.

Matthew Brannon: I feel like the recorder is a third person in the room, like you’re trying to impress a date or a friend you brought over and you’re trying to be totally undercover about it. "Ask me about my art…"

Roger White (Rail): Let’s start with the idea of the movie posters.


Brannon: I first came up with the idea to do the posters because I was invited to do a group show in Europe. I had just watched a series of old haunted house films. The classic ones, like The Haunting, and The Legend of Hell House, use a structure where a crack team of skeptics, the scientists, and believers, the mediums, enter a house and are supposed to negotiate the psychic energy in it and to prove whether or not there is life after death for the benefit of whoever is paying them. In the films, everyone that’s invited knows they shouldn’t be there, but they go because it’s a chance to be so close to wealth; it’s something that’s never entered their lives before.
This reminded me – and this is a stretch – of group shows in a way. All these people are put together like a dinner party. For this show we were invited to take over this museum. Especially for an artist at an early stage in your career its such an opportunity to be invited to do a show in a museum that, whether you don’t like the subject or don’t know anything about it or you hate the other artists in the show or you don’t know who they are, you will still do it. So then you either have to be a skeptic or a believer.

So at the time I was doing a lot of printed matter, and I was very interested in promotion … and residue. At a certain point in the project I realized I wasn’t going to appropriate a poster. And if I was making my own, then it wouldn’t have to be commercially viable; it could be more abstract. That was a liberating point. 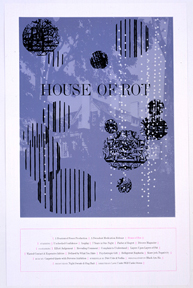 Rail: There’s a lot of text on these posters, and in other printed materials you’ve made, which reads correctly at first glance but then on closer inspection doesn’t mesh with the categories provided by the format. One doesn’t expect a film poster to give a director’s credit to "Good Prison Visit," or to list actors such as "Aspirin Overdose," "Hotel on Fire," or Lurid Gestures." How did this all arise?
Brannon: I realized that if they were going to be movie posters I had to put language on them because graphically I wasn’t conveying the idea with just the title and the image. When I first started I was putting in fake names and it got to be sort of a joke. As you can tell from my anxiety of doing this interview I don’t think of myself as a writer and I distrust the permanence of words or the commitment they have.

Rail: How does the text function in the work?

Brannon: The fastest way to gather meaning from a work is through the text; people latch on to it. To get around that the text had to be the most abstract element in the design, instead of being the most concrete. So I came up with this weird … salad of language. I take things from conversations and actual advertising and free association. So with the text you go to it thinking it’s going to be the ultimate clue but it ends up being another distraction. It took me a long time to accept that they were actually poems in a way. 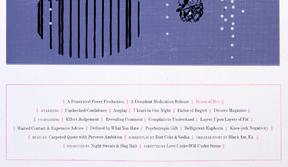 Rail: Your work uses publicity and promotion as a subject, and you do in fact make actual promotional material for other people’s exhibitions, catalogues, and events. Do you draw a distinction there?

Brannon: I like doing them and I think they’re related but I don’t consider them as part of my art. Design has been a way of learning a set of skills.

Rail: What about your own promotional material?

Brannon: Yeah, I’ve been making posters for all of my exhibitions, as long as I can convince people to keep producing them (laughing). There’s a lot of consideration that goes into those, and they are art pieces. [The exhibition announcement] is the only earnest space in the entire show in that I could have an image of my work and my name, and the information that’s there is the correct information. For me, it could compete with the work in the show and so I’ve taken this most earnest space and given it over to other artists without any restrictions other than the information that goes on it and the title of the exhibition. In the last few cases the artists have used their own artwork as images. I’ve had to consider how that works. Self-promotion is a difficult thing to live with. By making this huge poster and using someone else’s image I’m promoting them, and it doesn’t tell you anything about my work except that I make confusing posters.

Of course I really love Kippenberger posters, and we are flooded with advertising so to fuck with that is a great opportunity. There is also part of it that is very generous. When you put that much work into the announcement you hope people hold on to them.

Rail: The text in the work, and the titles, often invoke very bad emotional or psychological states. There is this imagery of excess, as well as a theme of consumption and regret. "Sick Decisions, "House of Rot," "Excessive Delicacy and Shrinking Contact," "Without End…" It’s very funny but it’s also pretty negative…

Brannon:[Awkward silence] That’s a stopper… as soon as someone says "aren’t they negative?" then you say, "I’m not negative…" (laughing). A lot of the things I write about are things I want people to admit to. I’m very interested in psychology and psychoanalysis and the idea of health. We live in a culture where there’s a prescribed notion of what health is. I feel that personally as a human or whatever I have a lot of problems with that idea of what is normal. So talking about food or alcoholism you’re talking about one of those challenges we each need to define for ourselves. It’s very interesting to me that we think we know what is right for everyone, to eat organic food or to exercise or to stay in your studio for two hours every day or to read Proust. Why do we work against ourselves, what is the motivation for that?

Rail: You labeled a batch of early posters "A Pessimistic Production." In what spirit did you intend that?

Brannon: When I use the word pessimism I use it in an affirmative as well as negative sense. For Schopenhauer, who ripped it off from eastern philosophy, pessimism meant that the will of the world was blind to your desires. The affirmative side of that would be that you are liberated and can construct a world in a way you see fit. It later drifted off into Nietzsche and other people and kind of bad angles.

The impulse to work against ourselves or to hide or be lazy is very strong. And that could have to do with being an artist. Quite often one’s first fantasy is to be left alone. We’re all made to feel so autonomous and that we have so much control over how well our life goes, and I think it’s such a give and take.

Rail: With what? Social control?

Brannon: Yeah, I don’t want to sound like Alan Watts or anything but nothing is that autonomous… But I haven’t been coming up with the solutions yet, my work is just calling attention to the problems.

Rail: Is this work specific to the experience of living in New York?

Rail: It seems like food and alcoholism, as subjects, are very suited to your work.

Brannon: Food culture is so exciting, it has to do with heath and taste, class issues—and then you add alcohol to that and it gets really exciting. The letterpress pieces were about alcohol and drinking, I’m doing new ones about dieting, diet culture.

Riding the subway every day, the advertising surrounding dieting is amazing. Diet ads are about becoming the most you can be, becoming this incredible, sexual, person—and they’re pain-free. But we all know it’s just about pain and resistance, horrible torture…

Rail: Is there anything else you want to say?

Brannon: I like that we didn’t talk about the tapestries. All I do is apologize for them, when I think about them.

Rail: In what way?

Brannon: "Those are so handmade, those are very decorative…"

Rail: I am wondering about the titles of those pieces, and your philosophy of titles in general.

Brannon: The two in the show were called "Heat Leaves Your Body" and "Emotional Secretary." Both titles have little to do with tapestry. It’s the same way of dealing with words, and directing someone’s interpretation, to show the unrelatedness and to use it somehow instead of just calling them "Untitled."

Peter Saville [the English graphic designer] was asked about the numbering system for Factory Records, how each album had a number but no name. He said you had to understand the context; at that time bands were called things like Electric Light Orchestra, and so to have a record called Fac24 was a cold gesture, and a conscious choice. Now, he said, I’m staying in a hotel called "W40". It would be better to call your band Electric Light Orchestra.

So with the tapestries I like the idea that it’s hanging in someone’s house… and a guest comes to dinner and asks about it, and the owner says it’s called "The Fear Which Organizes Your Guilt."