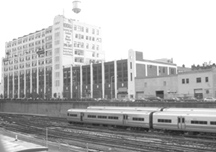 Hold on a minute. A developer buys a basketball team, then immediately lays claim to land owned by the state. Via eminent domain, he then gets to take a wrecking ball to an existing neighborhood. And when all is said and done the developer ends up with an immense stadium/mall/condominium project. Can someone explain to me how buying the New Jersey Nets automatically gives Bruce Ratner purchase on the future of downtown Brooklyn? This is decidedly not what democracy looks like.

Ratner, of course, has every right to make his case for why downtown Brooklyn needs the Nets, as well as for why the city and state should cough up millions to help bring them there. But the outraged residents of Prospect Heights, Fort Greene and Park Slope have every right to oppose his plans. Is there a stadium in the New York City area that co-exists with a thriving neighborhood? The immediate area around Madison Square Garden, not to mention Yankee Stadium or Shea, is not exactly a place you go for an evening stroll. Rather than spark new growth, Ratner’s project threatens to destroy neighborhoods that are getting along just fine without Frank Gehry’s designs.

But, lest the Rail be accused of not sharing in the excitement of Ratner and his fellow Brooklyn boosters, here is another suggestion: Build the stadium at the Brooklyn Navy Yard, and turn Wallabout into the next hot Brooklyn neighborhood. Yes, the area around the Navy Yard was once called Wallabout. To make it really trendy, let’s re-name it “Hooptown,” or something nouveau like that. In any case, many a strange place has become fashionable in Brooklyn of late, so don’t doubt Wallabout.

Creating growth where none exists should make both planners and developers salivate, and stadiums sometimes can indeed have a catalytic effect. When the baseball Giants built their beautiful ballpark in the China Basin section of San Francisco, a formerly run-down area of town quickly became full of condos and high-tech businesses. In SF, the city solved the transportation problem by extending a trolley line. To get people to Hooptown, the MTA could start with shuttle busses from downtown, and then consider various proposals for new kinds of trolleys. A hackneyed phrase comes to mind— about what happens when you “build it…”— but I’m avoiding it at all costs.

Borough pride? We all have it. A home team to root for? Sure, why not. A massive stadium in the center of town? Hmm. Let’s at least have a genuine debate about it, shall we?

In case you’re wondering, the Rail is a non-profit organization, and is thus prohibited by law from endorsing political candidates. However, we can encourage you to vote in the State Primary Election on March 2nd. Democracy should be determined by people, not pollsters, pundits or party officials.

J.V. Martin: Something is Rotten in the State of Everything Everywhere

In March 1965, a bomb ripped through the apartment of J.V. Martin, painter, provocateur, and leader of the Scandinavian chapter of the Situationist International. In what was rumored to be an attack by the Danish secret service, the bomb injured Martin’s five-year-old son, burned out the entirety of his apartment, and destroyed the bulk of his work and archive up to that point, including his “Thermonuclear Map” paintings—heavily loaded canvases documenting the landscape in the hours after a nuclear Armageddon, their savagery evident in a materials list that included diapers and chunks of rotting cheese.