Nels Cline: The Many Loves of a Musical Chameleon

Unwittingly, guitarist Nels Cline has become the single degree of separation between the bi-polar musical personalities of Lydia Lunch and Blue Man Group. He appeared prominently this summer in Europe and New York as part of the "punishing musicality" behind Lunch in the "Audience as Willing Victim" tour, only a few weeks after the release of Blue Man Group’s enhanced CD The Complex (Atlantic), on which he makes several guitar cameos. But while he may be a self-described musical chameleon, Cline does more than just change color while bouncing between settings like Lunch’s blood-red verbal slayings and the PR-friendly bemusement played up by those funny blue men: He draws on decades of genre-crossing experience, and he’s informed enough about what’s "out there" to stay loyal to his own musical proclivities. 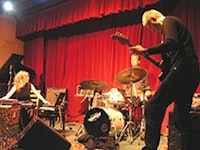 "I’ve been driving around for 15 years," singer-songwriter Todd Snider proudly declares, "making this shit up, singing it for anybody that’ll listen to it— some of it’s sad, some of it’s funny…" 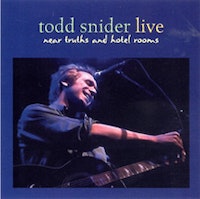 The American expatriate of the quintessential Henry James kind is in flight from one reality to another, engaged in a hejira that may transcendentally alter the conditions of his or her life. Often the handcuffs are golden, a suffocating surfeit of material comfort: an unearned inheritance, betrothal to a wealthy suitor. Vulgar American currency buys entrée to high culture, but in the end the European sojourn creates conflict.