Sound Itself Is No Sound: A journey into process and performance with Meredith Monk

I never imagined waking up in total silence at Zen Mountain Monastery in the Catskill Mountains and rolling out from the top bunk of a freezing cold bed in absolute darkness at 4 a.m., all so I could understand the secrets of Meredith Monk’s work. I never thought of using my soft city hands to rake a wide expanse of freshly mowed lawn in the blazing sun until huge blisters appear on my tender palms, all to penetrate the source of Meredith’s celestial songs. But I did. 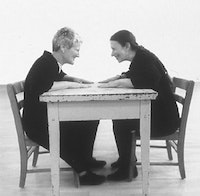 Ellen Pearlman (Rail): You said that there was no separation anymore between "my work and my life." What do you mean by that? Meredith Monk: Well I think it has always been a goal for me to not separate the moments of our lives that include art. I am now realizing that my [meditation] practice and my art are not two separate things. I am more conscious about the fact that one’s art is also a bodhisattva practice. 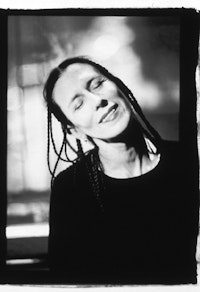 "Hell is other people." So goes the iconic existential adage proclaimed by Garcin in Jean Paul Sartre’s No Exit. Yet for choreographers Katie Workum and Leigh Garrett, hell is not only other people, but other people in a Miami condominium complex. Such is the premise of "The Miami Project," a new collaborative experimental dance and performance piece presented in February at the Williamsburg Art Nexus (WAX). Bronzed sun-bathers, terry-clothed go-go dancers, a hip-swiveling tennis player, and a Romeo from Brooklyn named Jerry Debruglio-uglio (my best stab at the spelling) are just some of the characters to be seen in this hilarious, absurd, but very smart work loosely adapted from Sartre’s famed existential play. Think, Sartre meets Esther Williams at the Copacabana.

A police horse stable may not immediately make one think of hybrid-performance bridging dance, installation art, costume design, and architecture, but for Julia Mandle it did. The result is Feast, a site-specific work that takes place in a former stable on the waterfront in DUMBO using Plato’s Symposium as its basis for exploring human desire or eros.

Watching aerial dancer Elise Knudson’s solo, "Visitant," is like looking at an insect undergoing metamorphosis; like inhabiting a daydream.