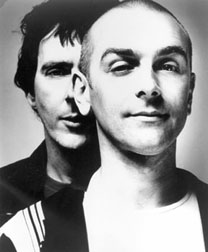 9:45 p.m. Sitting in a dark London hotel room, he chain smokes with wrist poised watch-face up, the minutes ticking by, phone pressed to ear as he obligingly listens to endless blather in the earpiece as music journalists ask incessant questions about Underworld, Underworld, Underworld.

This is how I picture Rick Smith as I attempt calling his hotel room at 3:45 p.m. Brooklyn-time, just as fire trucks, sirens blaring, pull up to my warehouse, causing me consternation that they’ll drown out our conversation-to-be. “Line’s still engaged,” the accented receptionist informs me for the fourth time. I hang up again and fritter the time away, contemplating how I’ll distinguish myself from the others during our 15-minute-allocated conversation.

I’ve been asked to interview Rick Smith, one of the duo that nowadays comprise Underworld, the techno band from England that, in the span of a decade, has only cranked out four albums but has summarily established itself as one of electronica’s übergroups. Before their “Born Slippy (Nuxx)” single flew off the shelves after appearing in Trainspotting and catapulted them to “generation soundtrack” status, they were renowned in the clubs and on home stereos for haunting beats, driving synth rhythms, and entrancingly cryptic lyrics (“porn dog sniffing the wind for something violent for me and you”). With their latest 10-track release, A Hundred Days Off, they’re back in the groove and once again positioned to mark their dance floor territory.

“Let me connect you,” the hotel operator announces as we chuckle at my fifth call. (Not so funny that I’m paying for all of these peak-hour international calls.) “’ello.” “Is this Rick Smith?” “Yea, it is.” To think that I waited eight years for an introduction to Underworld and it comes in the form of a transatlantic phone conversation. I’ll take it.

Just two days prior, I was supplied with A Hundred Days Off, which burned a hole in my bag all day before I could rush home and pop it in the player. Curiosity was killing me. What would they sound like after the departure of Darren Emerson, the third man in the group who helped propel Smith and Karl Hyde’s late ’80s Underworld from alt-rock obscurity into mega “underground” stardom? Did they lose it? Were they possibly better than ever? Fearing the worst, that one of my favorite groups would succumb to the doomed fate of most reconfigured bands, I determined not to judge until my second listen. The first track wasted no time at all, snapping like a whip into its beat, Hyde’s dreamy vocals—totally undecipherable to me as usual—riding high on repetitious basslines that ply the sonic ephemera with baited catchiness. It’s very Underworld. The music reverted to backdrop as I tended to chores, the rest of this 62-minute album rolling onwards through ups and downs that cascaded along patterned beats and downtempo techno glides. And then the real test: a spliff and repeat.

Attentively focused on this second sonic journey, I was treated to an aural-induced reverie. Like a powerhorse, track one, “Mo Move,” jumps out of the starters and asserts its chemical anthem without apology, warranting four consecutive repeat listens. Track two, “Two Months Off,” the band’s first single release, drives like a train for nine tireless minutes, pounding out finely crafted techno with delicious layers of textured vocals. Interspersed with these and other pulsating songs—tracks five and eight especially—are dreamlike ones, deliberate troughs to attain equilibrium.

While Underworld hammers out hip-shaking, percussive beats, they also deliver soulful tunes that balance out the record, providing comfort zones before the next upswing sweeps you along. Flirting with folkish twangs, raining down instrumental lullabies, and offering deep keyboard dirges, Underworld displays a keen conscience of progression, masterfully blending their trademark darkness with warm plateaus, alternating between infectious peaks and reflective lows—none of which leave you there.

“Luetin,” the album’s farewell song, quickly becomes my favorite, reminiscent of Second Toughest in the Infants (Underworld’s second album, released in 1996). It’s a paean to carefree days when my roommate and I used to play hooky and listen to Underworld for hours while slugging down Manhattans and belly dancing around the apartment. Six years later, me a different person, and them a revamped band, I find myself once again blasting Underworld and bounding around the loft with giddy abandon, overjoyed that Smith and Hyde have sustained their groove.

“So it’s quintessentially Underworld with characteristically unpredictable layers: danceable and introverted, frenetic and melodic, with garbled lyrics and inguinal beats,” I begin after introductory niceties reveal that Smith is anxious to conclude this long night of press calls. “So where’s the ‘but’?” he interjects. We both laugh. “No ‘buts’ other than, So what’d Darren do?” Apparently Emerson’s role was more complementary (and complimentary) than elemental, providing, in Smith’s words, “the confidence and lessons about music that got us to where we are now”—apparently a very good place.

Whereas many in the industry predicted that Emerson, Underworld’s DJ and resident “Technoboywonder,” was the glue that held the band together, this album proves otherwise. It’s insistently strident pulses and ebbs and flows belie any absent member, and make for a solid compilation by a solid band. “We’re really proud of A Hundred Days Off,” Smith continues. “We think it’s one of the best records we’ve ever made, and we’re really looking forward to playing it live.”

And live is where it’s truly at with Underworld. Hyde’s astonishingly hyper-kinetic onstage energy and Smith’s steady musicianship, coupled with visual projections by the graphic design art collective Tomato (of which Hyde is a member and whose image sensibilities are potentially epiphany-producing), add up to a musical tour de force that outperforms most other live shows. Being that they haven’t toured since Beaucoup Fish in 2000, audiences will delight at their stateside return.

Veteran and new fans alike can rejoice in the pleasures of Underworld’s evolutionary ascent. A Hundred Days Off happily returns them to the canon of dance music. It’s time to celebrate.

Underworld’s A Hundred Days Off was released by JBO and V2 Records on September 24th in the United States. Underworld will be performing live in New York City on Friday, October 18th at Hammerstein Ballroom.

Steve Rogenstein is an advocate for the arts based in Clinton Hill.