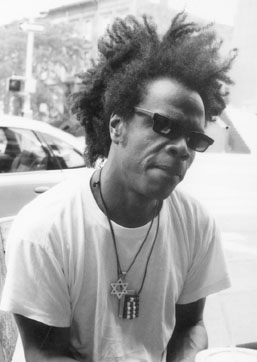 On Valentine’s Day last year, former Mayor Ed Koch stood up at the Algonquin Hotel and declared, “I love Marc Anthony Thompson.” It’s not what you might think. The occasion was the Atlantic Monthly’s annual Valentine’s Day event consisting of the reading of love letters to New York, and Koch was responding to the anecdote Thompson had shared in his. Marc Anthony Thompson, the creative drive behind the musical collective known as Chocolate Genius, had described what had taken place when he violated the unspoken etiquette of subway riding.

As Thompson tells it now, “I was riding in a subway car and everyone on the car was sitting there—no one looking up—and I thought how cool would it be to get on the train and not ask for anything but give something up. So I started out trying to make as much eye contact as possible and saying, just like you’ve heard it a million times, ‘Hello, my name is Marc. I’m not homeless and I’m not a drug addict and I’m here to offer you something because I’ve got a lot of love to give. I want you to have a better day and I want you to know that I love you. Thank you for not setting me on fire.’ You know how jaded New Yorkers can be, but people were always telling me they loved me, too, or giving me things—hugs, a leather jacket.” Even the normally self-promoting Koch, perhaps remembering the wave of concern and affection among New Yorkers post-9/11, was similarly moved to share the love.

That night found Thompson reading among heady company—Tim Robbins, Spalding Gray, Lou Reed, Koch. His career had been marked in the past by spikes of spotlight. He had made two albums for Warner Brothers in the dim past and had received an Obie and several other awards for his sound design on A Huey P. Newton Story, an off-Broadway production about the life of the Black Panther Party leader.

Surprising as it was for some to find Thompson’s star to have risen so high, it may have been even more eye-opening to others familiar with the critically acclaimed first Chocolate Genius album to hear Thompson espouse such brotherly love. That first album, Black Music, was almost universally described as “dark.” Its lugubrious odes to hangovers, as well as its tracks entitled “Half a Man” and “Stupid Again,” provoked comparisons to Nick Drake, the uncrowned king of mope rock. Also sparking constant comment was the achingly tender “My Mom,” a waltz-time meditation on his mother’s slipping away into Alzheimer’s: “It’s been five years and some change, but this house smells just the same, and my mom, my sweet mom… she don’t remember my name.”

But Black Music was also an album displaying savvy creative intelligence at work. Together with collaborator Abe Laboriel, Jr. and a diverse band (among others: Marc Ribot, Dougie Bowne, and John Medeski and Chris Wood of Medeski, Martin and Wood), Thompson sent out an album that is an homage to soul, R&B, rock and roll, and maybe even soft-shoe—that is to say, a record wide-ranging in terms of its sound. Sometimes the songs are dense and heavy and sometimes they’re crystalline, as when the delicate and lyrical piano of John Medeski trickles around Thompson’s smoky growl and the unexpected cleverness of his wordsmithing. If you had to sum it up you could call it Leonard Cohen meets Barry White. Many found it edgy and sort of self-critical, but Thompson defends the downbeat tempo as setting up a “take-a-bath-with-your-girlfriend” mood.

The three-year gestation period that resulted in Godmusic, however, generated an album that Thompson describes as a reaction against the first. At first pass, Thompson explains the changes as resulting from a difference in time and budget since Black Music was comprised of songs long-honed pre-record deal, and Godmusic’s budget was eroded by five weeks of studio work that produced nothing that Thompson was satisfied with. He now says that some of the redirection happened as a result of touring the record and playing its songs over and over.

Thompson’s earlier albums had been studio projects and were not followed by live performing. The touring he found very hard, and not just in terms of late nights, disorientation, and bad food. “When you tell stories that are true and you are heralding the release of a new record in the pop world, every night you play the new record. Every night I had to go out and play these songs that are like secrets, like opening your journal every night, about my mom, about my sister, about heartbreak ... and it got really hard, much more difficult than I thought it would be.”

He shifted gears for Godmusic, though. “When it came to the second record, I wasn’t interested in becoming this maudlin singer/songwriter guy who is going to rely on confessionals. I wanted to pick up the thread, but I wanted to pick it up from another angle. We decided, even in terms of tempo, that this was going to be a brighter record, but really a lot of the themes remain the same because I don’t think you get that far away from yourself.”

To listen to the two records is to hear the difference right away. Godmusic, in contrast to Black Music, is sonic- rather than song-driven. The narratives are much more oblique and the tunes rely on abstract qualities to derive their resonant effects. The raucous title track brings to mind an Old Testament God. The beautiful “Infidel Blues” sounds like an apology.

In fact the whole album is unusually conceptual, and it came about when Thompson and Laboriel changed their approach to writing the material, renting a space in L.A. and working business hours as a new form of discipline. What they quickly noticed was that nearly all of the songs contained some spiritual reference, whether it was “Goddamn,” or “heaven knows,” and they decided to expand upon this and use it in an effort to go deeper spiritually. Thompson was raised Catholic and is still sorting through the expectations of organized religion, admitting “I’m still as messed up as I once was. I simply walk by a church now and think about it.”

Much of the meaning of the songs, he says, has been “delivered after the fact,” a product of the studio process itself. Thompson frequently improvises on the vocals until they take shape. Feedback from the members of the band sculpts the sound until they all, or at least Thompson, are satisfied with what they’ve got. “The records are definitely collaborative. I’m the vision behind it because I have the most time and put the most thought into the process but Abe is responsible for much of the sound. When we get into the studio it’s pretty much a democracy.”

The constraints of their budget also led them to record digitally instead of analog, allowing them more latitude to experiment. For example, in “For One More Look at You,” a song that addresses “my child,” everyone in the band ended up playing instruments they don’t usually play so “the feeling is sort of childlike, like tender steps.” Paradoxically, it’s a union of form and content unusually sophisticated for pop music.

A year later, the urgency inherent in the release of a new album has passed and when Thompson listens to Godmusic, he doesn’t focus on musical shortcomings but attends instead to the associations the songs bring up—polaroids of stepping out of a cozy music studio where he has been recording with his friends into a glaring parking lot in the ugliest part of L.A., or of stepping out of a barn in Woodstock, where they also recorded, to take a peaceful piss in the snow.

At home in Fort Greene, Thompson is feeling fortunate. The regularity with which interesting opportunities have been coming his way has given him newfound hope for the future. “I’ve been really blessed. I’ve had a lot of opportunities I didn’t have before. Every time I’m wondering where the next paycheck is coming from, I get this great call.” He rattles off a list. “Next week I’m going to Hawaii to host a PBS show called ‘Colorvision’ that will air in June 2003. It features short films by filmmakers of color and highlights cultural diversity.” After that, he will go to Canada to do a record for Sony Classics with Hal Wilner.

Thompson clearly brings his travel experiences back to Brooklyn. He spent two weeks last year in Reykjavik doing research for the performance piece Iceland, co-produced with Roger Guenveur Smith, his collaborator from Huey Newton. The piece, a love story, takes us from that volcanic northern island to Brooklyn, where the disasters are man-made rather than natural. The project premiered at the Brooklyn Academy of Music, and was commissioned by the Walker Art Center of Minneapolis, the Museum of Contemporary Art, and the MacArthur Foundation. Another recent project was a cover of the Beatles’ “Julia,” which was included on the soundtrack of the Sean Penn/Michele Pfeiffer movie, I Am Sam.

The next major event for Thompson will again take place at BAM as part of the Next Wave Festival. Thompson will be performing with a couple members of his band family in a show entitled the “Next Wave of Songwriting.” On October 11 and 12, he will be featured together with Stephin Merritt of the Magnetic Fields and Ben Folds, formerly of the Ben Folds Five, in an evening of song. To be selected as one of three premier songwriting talents to perform at a venue like the Brooklyn Academy of Music is immensely flattering, making Thompson feel “like someone who sleeps in the fields but gets to have dinner in the house for a night.”

At least the success no longer seems like a fluke. But when he says he feels a lot less stressed, a lot more trusting that things will take care of themselves, is it faith? Thompson pauses and looks thoughtful. “It’s a little different than faith,” he asserts. “Well, maybe it’s faith, but it’s not blind anymore. It’s faith based on experience.”

KK KOZIK is an artist and writer who lives and works in Sharon, Conn. and Brooklyn, N.Y.

Place for Continuous Eye Contact (8): A Test-Drive with Mindfulness

Eyes are at once revealing and removing. They can draw us into others or help us see ourselves as an other. But when suspended in multicolored, dimensionless fabric, as Anspach has discovered, they have the power to do both.

Kathy Valentine’s All I Ever Wanted

Whenever I read a celebrity memoir, I ask myself, “Why does this story matter? What can readers learn from this?” There has to be more to a celebrity memoir than just tales of sex, drugs, name dropping, fame, and survival. What Valentine provides is not only a thorough accounting of her harrowing childhood, her hard-fought rise to stardom, subsequent collapse and redemption; she provides a window into an important part of rock history.