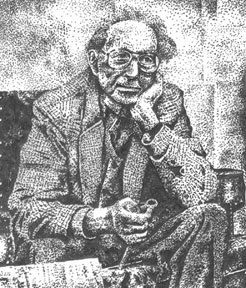 Anyone who is remotely familiar with the history of New York intellectual life, especially from the 1930’s onward, will associate the name William Phillips with the legendary Partisan Review, otherwise known to some as P.R. By providing and filtering a great many colliding forces in all of the ideological and cultural currents of its time, P.R. became the most influential literary and political journal in the United States.

In spite of the inconsistency of his political convictions, from early activities with the John Reed Club on, Phillips and Phillip Rahv co-founded P.R. in 1934. And later, during the McCarthy era, when he failed to defend many writers from attack by the House on Un-American Activities, Phillips, with his gift for subtlety and common sense, proved to be a more durable editor than his dominant and vigorous partner, who died in 1972. P.R. was to remain under Phillip’s guidance until his death last month on Sept. 14th. Born on November 14, 1907 in East Harlem, NY, William Philips’s father, who had changed his name from Litvinsky, was a failed lawyer from Odessa. Not unlike most of his friends, who were products of Jewish immigrant families, Phillips grew up in poverty and attended the City College of NY during the late ’20s. There he studied philosophy with the distinguished Morris Raphael Cohen and the literary experiments of T.S. Elliot. Later, he pursued Graduate studies at both NYU and Columbia.

It was through an abstract painter with an independent income, George L. K. Morris, a friend of the Literary editor of The New Masses F. W. Dupee, that P.R. was finally set free from the constant pressure to subordinate itself to the ideology of the John Reed Club, which was then supported by the Communist Party. In December 1937, P.R. conceived its mandate, with the first printed issue, ready to engage in the modern sensibility in literature and the arts as well as radical consciousness in the social and political spheres.

Dwight Macdonald, Mary McCarthy, Lionell Trilling, Irving Howe, Delmore Schwartz, and a few others were little known before becoming P.R.’s regular contributors. Only a few were paid for their work, and then less than $2.00 for every printed page: “It brought more glory than groceries, and that did not keep serious and eager writers wanting to appear in the journal.” In the following years, P.R. published many famous short stories by Isaac Balshevic Singer, Saul Bellow, and James Farrell. Clement Greenberg gave the abstract expressionist movement its first serious attention. The sensational debate between Sidney Hook’s pro-war position and Meyer Schapiro’s defense of classical Marxism (Schapiro was writing under a pseudonym, David Meriam, to protect his job at Columbia, a university known for having dismissed dissident faculty during WWI). It introduced American readers to the French existentialist writings of Albert Camus, Jean Paul Sartre, and Simon de Beauvoire. Robert Lowell, Elizabeth Hardwick, John Hollander, and James Dickey were among young Americans whose early work was printed in P.R.

During the 1960-70’s, P.R. was published under the auspices of Rutgers University and Boston University. By that time, most of P.R.’s writers had moved on and it was never the same again. As Phillips’ reminisced in 1997, “I miss being in the midst of a community of so many talented people. You were marginal in terms of the main culture, but you felt a tougher intellectual life. The talk! The talk was exciting.” And in a recent interview he continued, “I finally realized what was marginal then has become fairly central to the culture.”


Among the many published articles in different periodicals and magazines, Phillips also wrote a lengthy but interesting biography entitled, A Partisan View: 5 Decades of Literary Life, and edited several anthologies, including The Partisan Reader 1946, 1962 and 50 Years of Great Fiction from Partisan Review in 1997.

A historical exhibition aims to show us past life, but sometimes the retrospective becomes reflective, a two-way mirror seeing through to the present. So it is with New York 1962–1964 at The Jewish Museum, certainly at the moment our fair city’s most enveloping visual and aural museum experience.