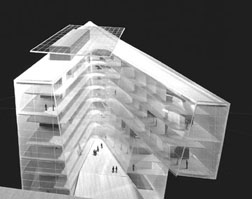 Enrique Norten has earned the distinction as one who works in triangles. Norten’s Mexico City-based architectural firm TEN Arquitectos has been selected to design the Brooklyn Public Library’s (BPL) Visual and Performing Arts Library (VPA). Just like with an apartment house project of Norten’s in Mexico City, the new building will occupy an uncommon triangular plot at the intersection of Flatbush Avenue, Lafayette Avenue, Hanson Place, and Ashland Place.

With the aid of a NEA New Public Works Grant, the BPL attracted some of the most innovative national and international architectural firms to submit design proposals, with Norten’s design winning over South Carolina’s Huff and Gooden Architects, among several other renowned firms in the running. The library will house a 24-hour media lounge, studios and performance spaces, a black box theater, a vast archival collection documenting Brooklyn’s arts communities, and various other impressive features. With construction expected to begin in 2005, the VPA stands to become a centerpiece of Fort Greene’s burgeoning Cultural District.

Norten founded TEN in 1985 and was joined by two other partners in 1987. While the majority of their extant projects are in Mexico City, Norten and TEN have become increasingly recognized internationally for the advanced design and environmentally conscious concepts that have come to characterize their work. Much of that work has been notably public: workers’ housing, schools, parks, museums, and workers’ dining halls are just a short list of the projects (some unbuilt) TEN has worked on in the last 16 years. The VPA building will give Norten a visible level of urban American prominence his firm hasn’t previously garnered.

The VPA building itself will assume the shape of an irregular ‘V,’ with the western arm stretching substantially further into space than the eastern. Norten clearly revisited two particularly relevant prior projects when designing this one. In the aforementioned triangular housing project, Norten renovated a Mexico City apartment house into an office for a distributor of high-end light fixtures. Another similarity to the VPA design is apparent in his design for the French Institute and Cultural Center in Mexico City. That building was split in two, based on various uses for the different parts of the building. By creating a V out of a solid triangle, Norten has infused an intelligent organizational sensibility into the VPA design. While the wraparound floors offer pedestrians total fluidity of movement, it seems likely that, given the VPA’s various functions, different areas servicing different needs will be separated neatly and logically.

Judging from the preliminary models constructed by TEN Arquitectos, the VPA will be most arresting when seen from Lafayette Avenue. As the northern view and the inside of the ‘V,’ this angle exposes all the inner workings and mechanisms of a functioning building. Only a completely transparent layer of glass separates the viewer on the outside from the studios, desks, and bustle that will consume the inside. A look at the model from this vantage point almost inspires a perverse sense of voyeurism—it’s like looking into an ant farm. To Norten’s credit, he makes viewing a building—normally a completely passive phenomenon—truly experiential.

There’s a jarring sense of precariousness conveyed by this end of the structure. The extended reach of the western half of the V-shape gives the building a not-so-subtle asymmetry, and the exposed planar elements on the interior (the different floors of the library) extend to the building’s northern limits at variant, irregular lengths on either side. The effect is dynamic; planes shoot out in hallucinogenic fashion and, despite its stockiness, the building threatens to tip over—right into you.

The two façades show Norten at his most idiosyncratic. A common sight to Mexico’s streets are tendidos, essentially strips of canvas used as an awning, creating a makeshift sunshade. From the beginning, Norten has incorporated some form of the tendido into his designs, never more brilliantly than for the French Institute. For this project, Norten abandoned mechanized heating and cooling systems. Instead, a centrally located courtyard gathers heat over the course of the day and distributes it throughout the building. But the eastern façade presented a problem. The rising sun would have drenched it with solar heat, disrupting the temperature balance for the rest of the day. To avert the problem, Norten stretched an elegant, gauzy fabric shield over the eastern face of the building. If there is a true Mexicanness to Norten’s work, it’s never more apparent than with his use of the tendido.

The VPA’s tendido will stretch over each façade, leaving only the inside of the V open to direct sunlight. This is the area of Norten’s design that is most likely to come under criticism. Firstly, the use of the tendido as sunshield is unnecessary, presuming there will be central heating and air conditioning. Which isn’t an argument for stringent architectural functionalism—Norten’s very unique idiosyncrasies and connection to place are refreshing—but if the model is an exact replica of the tendido to come, it’s just not all that attractive. Architectural criticism over the past 10 years has made a big deal out of the apparent weightlessness of Norten’s structures. Much of this illusionism is due to the graceful hanging of the tendidos, which evaporate the numbing sense of stolidity conveyed by so many 20th-century concrete boxes. But there’s nothing graceful about this tendido. Its antiseptic whiteness would be tolerable if it made some attempt at elegance, but the thing comes across as architectural wrapping paper.

The VPA tendido nevertheless should serve to obscure the noise and sight of traffic, especially the relentless swarms of notoriously cranky motorists streaming to and from the Manhattan Bridge on Flatbush Avenue. Also, with innovative cultural institutions like the Brooklyn Academy of Music close by, exciting collaborations could ensue, perhaps making use of the tendido’s cinematic capabilities. At this point in his career Norten seems somewhat doctrinaire about including certain elements in his projects, a welcome and refreshing means of personalization. As is the case in many of his other projects, the VPA will feature a courtyard, located at the inside of the building’s "V" shape. Not only will this be an employee-friendly area to hang out, but it should also encourage interaction with the community by providing a serene public space within an engaging architectural setting.

Norten’s design will likely face some heat for making no attempt to cohere with the Fort Greene’s neighborhood architectural concept, which, although in flux, remains largely brownstones, and stoic, solid, old Brooklyn structures. But it’s important to keep in mind how much not just the Cultural District, but really all of Brooklyn, is in a state of change. This is an incredibly multicultural neighborhood and borough, and its architecture should reflect that very dynamism.

Given the BPL’s primary criterion for a successful VPA design—“reinforcing urban interconnections…and dissolving distinctions between interior and exterior spaces”—Norten’s plan should be considered a success. This building epitomizes the anti-skyscraper model. Here, everything is exposed to the casual viewer from the street, a subconscious element of demystification that should instill a sense of access to the local community as well as to the VPA’s broader constituency. In its definitive act of subverting any trace of skyscraperness, Norten’s design is based entirely on the horizontality of long, layered planes. Amongst the vertical boxiness of typical New York City architecture, the VPA promises to be a welcome innovation.

Nick Stillman is a writer based in Brooklyn.