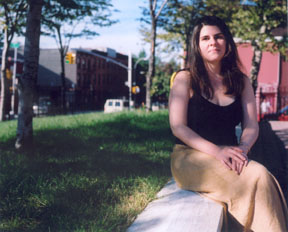 “Living and Thriving in Brooklyn” is a series of stories about people who live and work from their homes and/or neighborhoods in Brooklyn.

As part of this series the Rail introduces Esa Nichols, creator and maintainer of bergenstreet.com, a website for artists' work, and also to be used as a job/creative reference source by anyone who wants to log on!

Esa grew up in Chicago, in what she calls “an arty family in a hippy neighborhood, in the ’70s when hippies and beatniks still roamed the streets of Chicago.” Shortly after getting a degree in Sociology she left Chicago to live in London for three years—working while she was there to get young artists off the dole by employing them as apprentices to professional artists. While Esa found this to be a satisfying occupation, she also found England to be “dreary, expensive, and repressive.” She left England in 1998 and headed straight to New York with $80 in her pocket and three bags of clothes. “Looking back it was all quite romantic,” offers Esa via email (somewhat reluctant to respond at first—still in disbelief that I consider her ample subject matter for "Living and Thriving in Brooklyn"). She moved into a third floor apartment of her current building in Prospect Heights on Bergen Street almost four years ago. Now she lives on the first floor which offers a second bedroom and access to the garden.

Coming from semi-suburban Greenwich London, it took awhile for Esa to ease into the (at that time) barely-discovered Prospect Heights area. But she found the neighborhood was “refreshingly devoid of hipsters in flip-flops yakking into cell phones.” Back then she felt that her new neighbor “June bug,” the guys at the car repair shop across the street, the guys at A&J on the corner, and Ronnie who creates paintings at the end of her Bergen Street block became the most “familiar faces in my life.”

Ronnie’s paintings were something that I remember Esa talking about when I first met her. Since our first meeting I remember her infectious enthusiasm for finding new art and artists in her neighborhood—and to this day she still fantasizes about creating a gallery in her own apartment in order to cultivate an appreciation for art from the community and its residents.

This all makes sense in context to how bergenstreet.com was born in the first place: “I guess I feel a natural affinity for this street. It has to be the friendliest neighborhood I have lived in and perhaps it reminds me of the grittier crazy days of my youth in Old Town ’70s Chicago. I was putting together a website of the things that interest me: contemporary art, helping artists, writing about art, and the strangeness of life in New York City in general. I needed a good name for the site—one that wouldn’t be my name or too arty, pretentious, etc. It just kinda hit me one day—“bergenstreet.com”—and it seemed like no one had thought to appropriate street names for websites yet.” Esa says she never quite got bold enough to make dot-com stickers and stick them all over the Bergenstreet subway station… “a delicious and obvious marketing ploy! My friend who runs sparklehouse.com has graciously hosted bergenstreet.com for two years now,” she continues.

So what is the website’s mission after these two successful years? “After describing what I was doing to my friend Emily, she summed it up best: ‘sounds like Sesame Street for arty grown ups.’ I thought yeah—people coming along, lessons to be learned, art projects, general goofiness, sing-alongs, thinly disguised politics, emotional outbursts, games, and stoop sitting.”

The mission hasn’t really ever changed. It is still a collection of art and people, projects and information. “There are currently seven artists and three writers up on the site,” Esa continues. “I recently put up a Prospect Heights guide page which seems to be getting some serious traffic.” Her own projects are also buried in the site— like the time she tried to meet 2000 people in the year 2000. The list of the 253 people that she did meet is still on the site for posterity. “In the end its about showing things I enjoy,” which is why Esa has included the work of her dear departed Grandfather (a master American collage artist), as well as some pieces from a Belgian painter and an artist from Cincinnati whose work she’s followed.

However a great deal of Esa’s enjoyment comes from finding notable art in the Bergen Street/Brooklyn neighborhood. There is a link to Aeric Merideth Goujon’s phenomenal photography and he lives and works in Brooklyn. Last year Esa worked with the Love a Commuter project which sent artists with tokens of love into the subways on Valentines Day. All of the program notes and press releases were later posted on bergenstreet.com.

Esa generally aims to discover artists from anywhere, but she would be particularly happy to have artists from Prospect Heights on bergenstreet.com. “Most of the artists I know in this neighborhood like Eric Doeringer and Torild Stray already have their own websites—savvy artists that they are. But I would be more than happy to act as a web hub for artists in my area and encourage some exchange and the development of an artist’s community. I keep meaning to get the ‘Prospect Heights Artists Social Club’ up and running as a jumping off point for establishing an active network. It amazes me that there isn’t any substantial organized artist activity in this area of Brooklyn and I know there must be thousands of artists hiding out in Fort Green, Park Slope, and Cobble Hill.”

Esa tries within her busy schedule to sniff out new artists at events like BWAC Pier Show and the DUMBO Arts Festival. She prefers however to visit all of the non-profit spaces like d.u.m.b.o. Arts Center and Rotunda Gallery, and to utilize their slide libraries. She consistently keeps an eye on Gale Gates, Mastel + Mastel, Smack Mellon, and Metaphor, and feels that bkyn.com is doing a “dynamite job” featuring projects and artists from across the borough. “It’s funny,” Esa says, “many people think that there are artists everywhere, that every black-clad or unusually dressed person roaming the streets of Brooklyn is an artist. I have never been able to figure out how the whole ‘starving artist’ mystique survives; it can’t be much fun starving while Real Estate agents are tracking your every move with dollar signs in their eyes. But that said—the process of finding professional artists—who live in original AIR lofts, make a living making art, teaching and dreaming of buildings full of cooperative studios and the like—[finding this] was a much more difficult and longer process than I expected.

“DUMBO and Williamsburg have been very savvy about the marketing of their artist communities and encouraging collective activity and a public image—but sometimes within these areas it can seem like one big MFA program. So when I get visitors coming from France that want to go to Williamsburg because they have heard the buzz all over the globe… well, it leaves me feeling a bit sad for all the professional artists elsewhere in Brooklyn who live and work in relative isolation.”

Esa’s priority with bergenstreet.com was to start posting information relevant to professional artists in the city, or anywhere for that matter. She also loves posting people’s portfolios, writing, links, etc. and hopes that bergen-street.com is a place where artists can go to find links to slide libraries, calls for entry, magazines, and business resources.

“In my own work of advising artists I use my web site as a tool and a depository for information. Most of the things that are on bergenstreet.com are resources that I have come across in my research for things that will help the artists I work for. I find that many artists don’t know where to start so I spend much of my time giving them basic information and referrals. Because I don’t ‘represent’ artists there is only so much I can do for them beyond getting them organized and encouraging them to take full advantage of what is out there. It concerns me that the art world continues to be a closed system and I try to empower artists one at a time to push their own careers, be productive, and to be able to negotiate the often Byzantine rules and practices of the system. In the meantime I am also trying to develop a non-profit arts advisory and service organization that would eventually help artists and small organizations throughout the city. The uneven distribution of opportunity and wealth amongst artists in a city driven by its cultural capital blows my mind—artists make this city what it is and yet so many of them are barely surviving here and no one seems to be doing anything about it.”

You can also find Esa dispensing advice to artists roughly once a month at Artkrush.com, which now also has copious useful information for artists—along with wonderful regular features and projects.

This conversation for the Brooklyn Rail’s New Social Environment series brings together several people connected to the recent exhibition of drawings by the self-taught artist Joseph Yoakum at the Museum of Modern Art. The exhibition represents a landmark in contemporary efforts to bring to a wider public the work of this remarkable American artist.