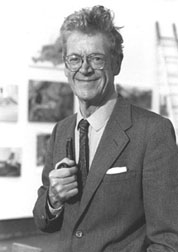 I first heard of Andrew through text, rather than image. In a memorial volume for W H Auden published in 1975 Sir William Coldstream remembered that when he had gone to visit WHA at the Downs School, where the poet was teaching for a few years, Auden had introduced him to one of his prize pupils, a young man named Andrew Forge. But the name meant nothing to me until the following year, when Natalie Charkow, with whom I was beginning to keep company, spoke of him with great respect, and told me that he had just come to Yale to be Dean of the School of Art. The following year, she advised my daughter Martha, then a Yale College freshman, to take a drawing class with him. I myself came to Yale to teach in 1977, and it was only then that we met him and Ruth for the first time, and first came to know one of the most remarkable friends of my later life.

Nothing I had heard of him before had prepared me for him and for his work. The very first paintings of Andrew’s that I ever saw were in his and Ruth’s house on Whitney Avenue in New Haven, and I was initially puzzled by what I misread as their pointillisme— I remember secretively moving back and forth among pieces of living-room furniture trying to find the canonical point for resolving what I wrongly construed as the image being generated by the dot-like marks (one of these seemed to be a sort of ghostly skyscraper.) It took a couple of years of revisiting these paintings, and, just as significantly, becoming acquainted with Andrew’s remarkable mind and knowledge, to enable me to grasp their complexity. What he saw— and how eloquently he spoke of what he saw— in art, in literature, in modern history— helped me to see in his work the dynamic and dialectical structures which gave the paintings their unprecedented kind of unity. To discern, for example, how they could represent themselves as populations of dots with very different ethnic backgrounds and interests, often competing with each other for representativeness and as often, like swarming bees, composing vibrant societies. In this, as in many other matters, I became something of his student early on. Certainly, hearing a lecture he gave at Yale on the genesis of his own work made me understand a lot, even as it was immensely informative about the largely unfamiliar milieu of painting in Britain. But in a strange and unusual way, it was through his discourse that one gained deeper access to his painting (let alone, painting in general), and, eventually, through his painting that I came to hear more clearly the resonances of much that he said.

Reading him gave one another angle of vision into his art and thought. He was, simply, a superb writer, as a working art critic in English and American journals, and in his powerful studies of Soutine and Monet, among others. He wrote as a painter in the rarest and most authentic way, never once calling any attention to himself, but revealing, on almost every page, something of how painting itself thinks. I know the admiration for his writing held by Karl Miller, the great literary editor of The Spectator and The New Statesman for whom he wrote, and it is to be hoped that a major collection of his longer and shorter pieces over the decades can be assembled and made available.

But the great mass of Andrew’s knowledge and acuteness of insight of which only the unsubmerged tip had been visible became apparent even more in the early 1990s when I had the unique privilege of team-teaching with him in a seminar that included Yale College undergraduates, graduate students in literature and philosophy, and students at the Yale School of Art. One kind of knowledge, and one mode of insight was revealed much earlier on hearing him in final crits at the Art School, and learning immensely from what he chose to say (and, by inference, what he must have noticed and chosen not to comment on). But it was in the few years of teaching together in a course called “Word and Image,” sampling important and exemplary representations and other considerations of visual art in poetry, fiction, and exposition from Homer through the twentieth century, that the full shape, as well as the size, of his learning emerged. Whether throwing fresh light on well worked-over passages in Plato, or commenting on the early and influential anecdotes of artists in Pliny, or amazing me with his knowledge of which obscure French painters Balzac might actually have known at the time he wrote Le Chef-d’oeuvre incconu ; whether discoursing eloquently on the milieu of art and artists invoked in Hawthorne’s The Marble Faun or Zola’s The Masterpiece or Kipling’s The Light that Failed or Wyndham Lewis’ Tarr, Andrew demonstrated an uncanny literary sense as well as an art-historical one. He seemed to sense what each writer’s sense of painting or sculpture was, what sort of work each had in mind at various points. And when talking of Diderot, Winckelmann, Lessing, Hazlitt, Ruskin, Pater or Adrian Stokes, his observations were both pointed and broadly illuminating. It’s hard to say whether his co-instructor or their students learned more from him, but what his colleague learned about him was considerable.

Of course, some of this could emerge, for the attentive listener, in conversation with him. Every time we met, he talked penetratingly about history and politics, about high culture and agriculture—which, as a farmer, he had known so well—as much as about art, and particularly about literature. We had both known and cared much for W H Auden and Andrew’s knowledge of and feeling for poetry in French and English was finely tuned and well-informed. But one can now recall characteristic kinds of observation he would make, such as how much was revealed to him about differences between British and American society when he first looked under the hood of an American car. Perceiving the openness and accessibility to inspection and repair of the engine and all its functional units—as opposed to what he termed an obscure and enigmatic disposition of parts under the bonnet of a British one—he remarked that the latter was designed to be dealt with only by an upper-class owner’s hired specialists, and the former by any possessor. There are many modes of being a British “resident alien” (as I believe the immigration status is still called) in the United States. Many stances, that is, that an Englishman living here can take, toward his native and adopted worlds and relations between them, for the benefit of listeners in the adopted one. Andrew’s was unique, in its unhesitant expressions of affection, amusement, fascination, and sadness directed toward both nations, and its display of the kind of love that grows in the mental ground of skepticism. Andrew was indeed an intellectual, in the truest sense; he had strong feelings for ideas as well as for facts and images. One might say he almost saw matters of thought the way he felt what he saw of the visible world. The way he lived and worked with his eye, his mind, and his two writing and painting hands was always a wonder, and shone honorably for all of us in a darkening time.

John Hollander is the Sterling Professor of English at Yale. His most recent collection of poetry is A Draft of Light (Knopf, 2008).